Since its inception in 1967, Action Collection Agency of Boston has been widely recognized for its specialization in healthcare, as well as collection expertise in other industries including utilities, education, retail, commercial and purchased debt.

Prior to its acquisition by Jay Gonsalves In 1991, ACA had multiple regional offices. Over the years, with effective planning, key strategic acquisitions and strong leadership, Jay has steadily grown the rechristened Action Collection Agencies, Inc. and eventually consolidated its operations to its Middleboro, Massachusetts headquarters with more than 50 dedicated professionals who work diligently on behalf of its clients.

Jay E. Gonsalves, President and Owner
Following an eleven-year career in the hospital industry, Jay was a senior executive at Osborne Associates, Inc., one of the then largest healthcare collection agencies in Boston for eight years and holds a Master of Science degree in Healthcare Administration.  He is a past president and board member of ACA International, Inc. and holds its International Fellowship of Credit and Collection Executives (IFCCE), International Scholar and Master Credit Executive (MCE) designations.  Jay is also an ACA International Certified Instructor and conducts online teleseminars and face-to-face training programs for agency owners, managers and staffs throughout the country, including our own.   He currently chairs its Federal Affairs Committee and is actively engaged in national regulatory and legislative activity.  Jay is an internationally recognized speaker on the accounts receivable management industry, and has addressed Massachusetts HFMA, AAHAM and MAPAM on multiple occasions.  He is also a past president of the regional New England Collectors Association and is the current chairman of its legislative committee.

Michelle Rasmesen, Director, Operations
Michelle joined our management team nearly a decade ago bringing with her years of experience running first-party, early-out and bad debt collection operations for two national healthcare collection companies, as well as her experience at a physician billing company.  She currently oversees all of our early-out/first-party and bad debt collection operations, as well as client services and cash applications.  Michelle is also a Certified Medical Billing and Coding specialist.

Scott Collins, Director, IT Services
Scott first began his involvement with Action Collection Agencies, Inc. as a contracted Information Technology consultant in 1995.   Since then, Scott has overseen ACA’s IT operations, including numerous special projects, server/network/telecom conversions and upgrades, data integration with our clients’ HIS and EMR systems, and managed the technology component of company’s move twice to larger facilities due to its growth.  He permanently joined our management team full time as Director of IT in September 2012.

Prior to ACA, Scott worked as an IT Team Lead for a large healthcare system, was the Director of IT for a national revenue cycle management company and provided IT consulting services to many healthcare facilities. He holds a Bachelor’s degree in Computer Science from The New England Institute of Technology, as well as numerous IT certifications and continuing education credits specific to cyber security and healthcare information systems, such as Meditech™, Epic™ and Athena™.

Ned Hochmuth, Director, Administrative Services and Compliance
Ned joined ACA in 2016 as our Client Services Manager overseeing that department and several special A/R and other projects. Ned has recently assumed responsibility for overseeing all administrative, financial and compliance functions. He has years of experience working with Boston teaching hospitals, communality hospitals, and physician practices. Because of Ned’s extensive patient accounts experience he understands the challenges that hospitals and medical practices face in today’s challenging healthcare financial management environment and what is expected of service providers such as us. As expected, Ned is a long-time member of the Massachusetts/Rhode Island HFMA, AAHAM and the American Academy of Orthopedic Executives.
Collection and Support Staff Members
In addition to the key senior management staff referenced above, we have numerous middle management and staff who are former financial counselors, medical billers, collectors and coders who have come to us directly from healthcare providers and other healthcare financial organizations, as well as college medical administration programs and training centers, such as The Salter School. 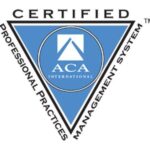 We are one of the few agencies that has earned the PPMS® operational certification from ACA International.
Action-Collectors-Pledge
View Action Collector's Pledge